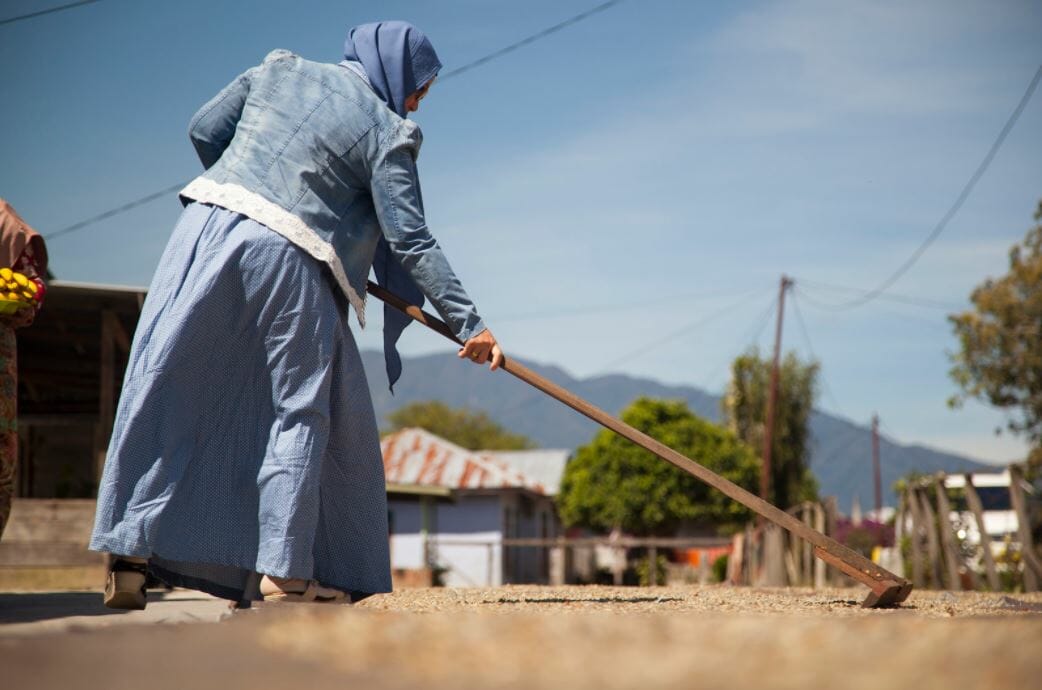 International Women’s Day is a global effort to celebrate the social, economic, cultural, and political achievements of women, and advocate for accelerating gender equality. It’s a single, intentional day to recognize the many contributions of women and all the barriers they must overcome. I love coffee, but it’s a field that has a long way to go towards rooting out patriarchy and lifting men, women, and non-binary folks to a level of true equity. According to the International Coffee Organization’s (ICO) insight report on gender equality, up to 70 percent of all work done on coffee farms is performed by women, while only 20-30% of coffee farms are female-operated. Additionally, women who work in coffee face sexual violence, legal barriers to land ownership, fewer investments, and lower wages, especially female producers, migrant coffee pickers, and indigenous women.

“70% of labor in coffee production is provided by women”

Today (and every day) is a chance to challenge the structures that make it more difficult for women to work in coffee, but also to celebrate and elevate the incredible women who have managed to build businesses all over the world and produce some truly exceptional coffee. Today we are telling the stories of the amazing women producers behind 5 particular coffees from all over the world that you can support right now.

Our first coffees come from the Gayo Highlands of Aceh Province at the tip of Sumatra in Indonesia. Both the Dark Sumatra and Sumatra Highlands from Colectivo Coffee feature coffee from the female-led Koperasi Pedagang Kopi Ketiara Cooperative composed of primarily women producers. The Chairwoman, Rahmah- who like many Indonesians (and Beyonce) goes by one name, is described as “a force to be reckoned with.” The cooperative, under her leadership, has focused on improving coffee quality and resulted in a clean, more complex cup profile that has helped them stand out amongst other growers and producers in Sumatra. A women-led cooperative is rare in that part of the coffee-producing world, but Rahmah is driven to create opportunities for young people, especially women from the area who are usually forced to move to the cities to find work and rarely return.

“In my parent’s era, women stayed at home raising the kids, sweeping the floor, doing the laundry, and cooking. I want all women in Central Aceh to be independent. Equal with men.”

Rahmah, Chairwoman of the Ketiara Cooperative

Because of Ketiara’s exceptional quality and mission, they have become one of Colectivo’s primary sources for Fair Trade and Organic coffee. On a previous trip, the Colectivo team produced the beautiful video below of the producers and an in-depth interview with Rahmah to allow her to share her own story in her own words.

This next coffee comes from Ana Isabel, Iris, and Lourdes Alvarado from the Copán region of Honduras. Their 12 hectares of land have been in the family for more than 50 years, passed down from generation to generation. Ana Isabel is the mother of three, manages the farm, and works as a teacher in the local school. Iris graduated as a taster from the Honduran Institute of Coffee, became a licensed Q grader, and serves as a production manager in the local coffee cooperative. The Alvarado sisters work together to uphold and build upon their families’ coffee production legacy and are passionate about continuing to innovate to bring the best quality cup of coffee to the table.

Even though coffee production has been in their family for generations, it hasn’t been an easy process for the Alvarado Sisters who have had to grapple with the volatility of commodity coffee market pricing. With the assistance of their cooperative partners, they’ve received support and training that has enabled them to increase the quality of their coffees to specialty standards. Within their coop, COCAFCAL, the Alvarado sisters were founding members of “Flor del Campo,” a group of women producers who are being trained to produce better quality coffee so that they too can have access to a differentiated market full of opportunities. Flor del Campo helps members train in cupping, roasting, and selling their coffees to local towns in the region. Today there are 93 members who are all either head of household, own their farms with their husbands,  and/ or are daughters of farmers. 20 cents of every pound of the Honduras Alvarado Sisters coffee is paid as a premium to Flor del Campo to support the continued education of female producers in the area.

This medium-light roasted and fully washed coffee includes Catuai, Parainema, and Lempira varieties grown at 1,550 meters above sea level producing a balanced, medium body. In the cup, you may find notes of nougat, orange spice, and caramel.

In Kinyarwanda, Rwanda’s official language, Ejo Heza means ‘a brighter future,’ and it comes to us from the female members of the KOPAKAMA cooperative. KOPAKAMA is a 774 farmer cooperative, and in 2011, the female farmers organized themselves into Ejo Heza which focuses on helping its members produce better coffee and attain higher pricing. Premiums on their coffees are reinvested into women’s health and education initiatives, agronomy support, and microcredit loans for its members. Huckleberry works with Ruth Ann Church of Artisan Coffee Importers to build their coffee from two of several day lots from Ejo Heza. The women of Ejo Heza are always looking for ways to increase the health of their trees, and are conducting experiments on the optimization of weeding and mulching techniques to increase their margins.

This coffee comes from the western region of Rwanda near Lake Kivu that is almost entirely planted with the Bourbon variety, which lends a deep, sugary, syrupy sweetness. Rich red clay soil combined with meticulous picking, sorting, and processing contribute to a sweet, complex, and sparkling cup.  This coffee is layered with bright flavors of cranberry, sweet spice cake, and juicy pink grapefruit. Sounds delicious, right?

Coming to us from the other side of Lake Kivu in the Democratic Republic of Congo is the  Project Congo Muungano. This is the 5th-year Wonderstate has worked with the producer group from the Muungano cooperative. Formed in the wake of years of civil war in the Congo, Muungano in Swahili means ‘togetherness.’ The violent conflicts divided the people of Eastern Congo, destabilized the region, and tore families apart. In 2009 the founding members of Muungano sought to reunify their communities and re-establish economic opportunities for their region. Now, ten years later, they have grown to more than 4,300 members, more than half of which are women. This is particularly meaningful in the Congo where women have been historically marginalized and have suffered gender oppression and violence while providing the majority of the labor to produce Congolese coffee. The majority-female Muungano cooperative is helping to stabilize their community, creating economic opportunity, and producing amazing coffee.

This coffee is part of Wonderstate’s ongoing Project Congo collaboration with On The Ground, a non-profit working on community development projects in coffee-growing regions. Through the Project Congo initiative, Wonderstate is donating $1 for every pound sold to support gender equity education in the Eastern Democratic Republic of Congo. This year-long pilot project will train 100 Muungano Coffee Cooperative woman farmers and their husbands and will provide them with gender equity training, alternative income-generating activities, and credit and savings groups as part of a continuum of support.

This coffee is special for a lot of reasons, one of which is that this is the first time Wonderstate has blended two processing methods into one single origin release. Two-thirds washed, and one-third natural process adds sweetness and complexity to this coffee while still retaining the crisp acidity that you would expect from a Congolese coffee. We taste tangerine, baking spices, red currant, and elderflower in this dynamic, savory cup.

In response to inequity in the coffee-producing world, Spyhouse Coffee Roasters created a year-round offering sourced exclusively from women coffee farmers. These producer groups are selected from a list of associations that their importing partner, Café Imports, has established within their network of producers. Starting in 2012, Café Imports began paying members a gender-equity premium on top of the quality-based initial price for their coffees in order to incentivize more female representation. CJ Porter Born is the Head Roaster at Spyhouse and first took notice of importers putting a focus on importing and advertising female-produced coffees about 6 years ago. This change has made it easier for roasters like Spyhouse to continually feature female producers.

“In several countries, the whole movement of a Women Producer cooperative not only gave the women in the region a safe place to live and work, but also gave them a set of skills that they could use and develop and provide for themselves for the rest of their lives. It had massive social impacts, and also led to a notable increase in quality in several cases.”

The group featured in this coffee changes seasonally, and the current group is from the Gayo Arabica Mahkota Indonesia Cooperative (GARMINDO) in Sumatra. Started in 2019 with 625 smallholder farmer members, women coffee producers within GARMINDO formed their own subgroup from whom Spyhouse’s Women Producer coffee currently comes. The women members typically bring their coffee in cherry form to a collection point where it is de-pulped, fermented underwater for 12 hours, and given a pre-dry before undergoing the wet-hulling process. The coffee is then dried on patios, typically taking 2–3 days under sunny conditions. This medium roast coffee gives us an earthy character with notes of cocoa and baking spices.

All month long we will be showcasing coffees from women producers and from our female-owned roasters in our Women in Coffee collection that you can browse and support. When you support female producers, you’re directly investing in the removal of the barriers that hold women back in this field.

Other Female Produced Coffees to Try:

Don’t forget to try coffee’s from our female-owned roasteries too!